How do the Medicare Trust Funds Work?

I’m Andrew Bennett and welcome to today’s show.  On the program today we will be discussing the Medicare Trust Funds.

You may have heard that Medicare is nearly bankrupt or insolvent and we will address that tonight.

When discussing Medicare and it’s finances you often hear about Medicare Trust Funds so we will begin by discussing these funds, where the money comes from and where it goes.

When it comes to Medicare you have probably heard of Parts A & B.

This reminds me a bit of Dr Suess’s Thing One and Thing Two…but they are not at all similar.

Part B is referred to as “Medical Insurance.”  It will cover the medical services needed to diagnose and treat your health issue.  In addition, it will cover preventive services, durable medical equipment, second opinions before surgery, and more.

Part A is Funded by Payroll Taxes

These two parts are funded in different ways.  Part A is funded by payroll taxes (taxes that are taken off your income before your employer pays you).

For most people each pay period will see 1.45% come off their pay.  In addition to that the employer pays 1.45% into Part A as well.  Therefore, an amount equal to 2.9% of your paycheck goes to finance Part A.

Where does the money go?

It goes to the HI (Hospital Insurance) trust fund. I don’t know about you, but when I hear “trust fund” I think of a great big pot of money earning interest or dividends.  That trust fund just gets bigger all the time and we just use the earnings and leave the bulk of it alone…right?

That’s not actually how the “HI” trust fund works at all.  It really works almost like a checking account.  Money comes in and money goes back out.  There is a balance from year to year, but it’s not huge and it’s used when the income from those payroll taxes is not enough to pay all the bills.

As you can see from the chart to the right the balance at the end of 2017 and 2018 are very similar…only two billion dollars in difference. However, in the course of the year there was income and expenditure of over 307 billion dollars….money in and money goes right back out. 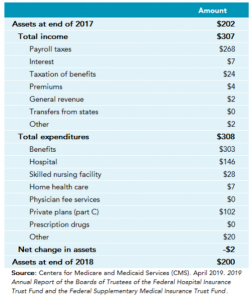 Not what I usually think of when I hear “trust fund.”  Note image to the left is taken from taxpolicycenter.org and is based on numbers put out by CMS (The Center for Medicare and Medicaid services. (Read their article here)

You may have noticed that the initial balance was 202 billion and the ending balance was only 200 billion.

That is what the problem is in the long term (or not so long term at this point). There is more money going out than coming in.

In addition, there’s a dynamic where baby boomers are still retiring and there’s fewer workers per retiree paying in that payroll tax.

At the same time, we had the “Great Recession” and now a pandemic to slow the economy.  A slow economy means fewer payroll taxes.

This next part is very interesting (it’s interesting to me because I geek out about this stuff).

Remember, Medicare has Part A and Part B…”thing one and thing two” …remember?

The Part B Trust Fund is hardly, “Supplementary”

Part B (Thing two) is referred to as the “Medical Insurance” by many.  Remember it covers the medical services needed to diagnose and treat your health issue.

Officially, the trust fund for Part B is called the, “Supplementary Medical Insurance Trust Fund.”  I think this is a bit of a misnomer as this trust fund is actually where the majority of charges are…what’s “supplementary” about that?

Here is where it get’s interesting.  The Part B trust fund is part of the general federal budget.  Since it’s part of the general budget it’s has a broader income base.  For example:  Retiree’s already on Medicare no longer pay anything towards Part A, but they are still paying income taxes.  In addition,  they also pay a monthly Part B premium.

The key point here is that since there are more income streams for Part B it is more resilient financially and has no funding issues.  The issues are only with Part A.

How about a picture graph from the Kaiser Family Foundation to Explain it?

With all the funding complexity I’ve described…I’ve actually simplified things a bit.  Here’s a chart from KFF.org (The Kaiser Family Foundation) (Read the full article here) showing more detail on how Medicare is funded. 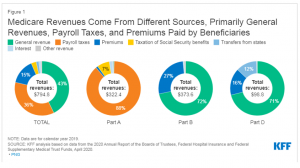 The current projections are for the Medicare Part A “trust fund” to run out of excess funds in 2026.

Remember those excess funds are what makes up the difference between the funds taken in through payroll taxes and what goes out to pay claims.

2026 is really just around the corner.  The last time the Part A trust fund got this depleted was 20 years ago back in 2001.  It also happened just a few years before that in 1997.

Chances are the politicians will eventually do something, but don’t expect it tomorrow.  Chances are it will be saved up by both sides and used as a political issue in the 2024 race for President.

Thank you folks for dropping in and learning a little bit about the Medicare Trust Fund system.